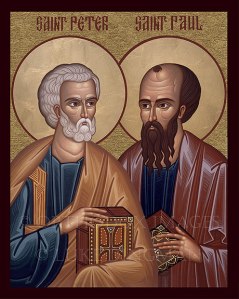 Study:  What are the unique gifts that God has given me?  How might I be called to share my life with others?

Pray:  Ask the Lord for the guidance and direction you need.

Serve:  What needs are before you right now?  How can you help another with your life?

Every year on June 29th the Church celebrates two of its greatest figures – Saint Peter and Saint Paul.  Since this feast falls on a Sunday, we transfer the readings and prayers of this feast to all the weekend masses.

When you think about the influence that these saints have had through their leadership, writing, and example it is easy to see why the Church chooses a day to honor their memory.  Their lives are part of the very foundation of our faith; they were human instruments by which God was able to share the Good News of Jesus Christ.

Saint Peter, for all his human weaknesses and failings, offered his leadership for the early Church.  The very fact that he made mistakes, spoke out of misunderstanding, and sometimes let fear and doubt cloud his judgment is the very reason why many people respect him.  Rather than get frustrated or dejected, he kept getting up and following Christ.

Saint Paul, who formerly persecuted the Church, would become its greatest advocate through his immense number of letters, exhortations, and journeys.  At times misunderstood or openly attacked, he continued to proclaim the message of Christ.

Life was not easy for these men!  They were physically tortured, imprisoned, falsely accused, mocked, ridiculed, beaten, and at times abandoned.  They gave up their families, their careers, the stability of their lives – ALL FOR THE LOVE OF CHRIST.

In the end, this immense personal sacrifice would culminate with the greatest of all offerings: they would give their lives for their faith.  Peter would be crucified upside down (stating that he was unworthy to die in the same way as his Lord).  Paul would be beheaded.  Their deaths both took place in Rome, where they spent the last days of their lives, teaching and preaching in the name of Jesus.

These men were some of the very foundation stones of our faith.  Upon the example of their lives we have built our Church.  We are their living legacy; their example inspires us.

Yet they also remind us of our obligation to the next generation.  Just as Peter and Paul shared their faith, so too we are called to do the same.  We have the opportunity to continue their work, and thus be an example to future Christians of the love and faith that comes from Jesus Christ.

A Catholic priest since 1997, Fr. Andrew Ricci is currently the rector of the Cathedral of Christ the King in Superior, WI. His website "Three Great Things" can be found at studyprayserve.com and his podcasts can be found under "Catholic Inspiration" in the iTunes store. END_OF_DOCUMENT_TOKEN_TO_BE_REPLACED
This entry was posted on Tuesday, June 24th, 2014 at 12:04 pm and tagged with Catholic, Inspiration, Mass, Service and posted in Feasts & Solemnities. You can follow any responses to this entry through the RSS 2.0 feed.
« The Body and Blood of Christ
14th Sunday of the Year – Meek & Humble of Heart »